Dissociation from the natural world verges on complete disembodiment, represented in Archontic ploys such as “transhumanism,” cloning, virtual reality, and the uploading of human consciousness into cyberspace.~John Lamb Lash

In the morning, I am empty, ready
to create in enmity’s face, steady
march of automatons proselytize
Derisive promises their coin can buy

they leer over curvaceous forms, sedate
while poisons infuse their boxes. Slave state
voluntary, they espouse the memes, dream
in lyrics from pop songs. Living beseems

false images on blue projected screens
so they shun the sun, kaleidoscope greens.
I cannot save a soul. I stand here, strong
cleaning Sophia’s fractal with my song.

Inspired by: Coin, Over and Curvaceous. 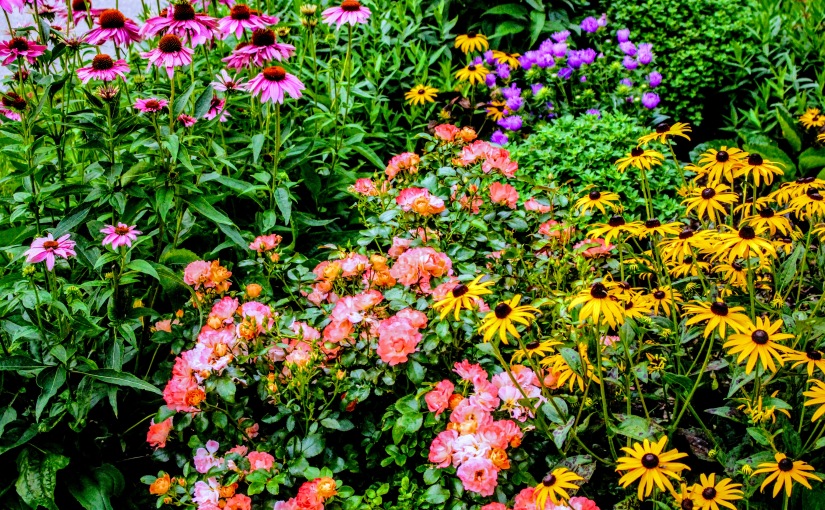 and ferns, the waters flowing in the lake,
birds, blossoms, fish. Which myth panders heartbreak
and which inspires? False premises at stake
impetuous humanity mistakes.

This intense vitality speaks through me
heart-opening. I stand sovereign, be
poised warrior-woman unafraid and sound
in all the noise, holding this sacred ground.

As day begins, I weave intentional
loving strands. No qualms, unconventional,
a vibrant reminder to bronchioles:
breathing, we do our part. Unlock keyholes

to now where pure creation moves us through
the loom, each interlacing skein imbued.
Unique patterns emerge smooth and knotty.
I show up powerful. Call me haughty,

naughty, even dotty. My heart is clear.
My contribution in love’s hues mirrors
the energetic dance. Once realized,
the beauty of each thread intensifies.

Inspired by: Qualms, Bronchiole, Reminder, Haughty and morning chores nourishing and keeping alive the gorgeous living beings at the house where I’m petsitting. 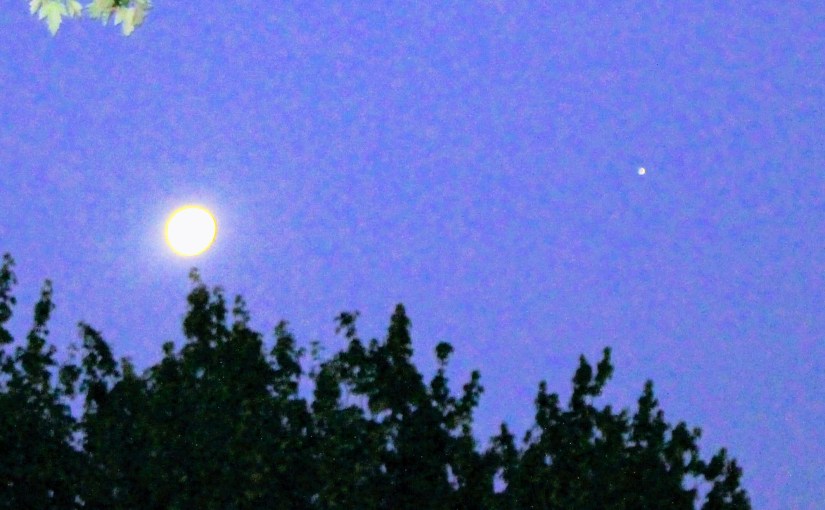 Accompanied by the animals and feathered spirit messengers, I grounded, watchful and curious for the new breed rising in Sophia’s embrace.*

I grew up all alone, girl in the midst
of raffish pretense, dismissed by a fist
when they’d insist that black is white, let fly
their rage when I’d insist in earth, not sky

the power source, mother, which a brother
could not perceive. Their might makes right a lie
subversive like the ivy I would cut,
beliefs like holdfast vines that cling and shut

til now they creep in darkness, boxed in dreams,
fed by unholy streams. Caught in deep sleep
they rouse angrily when they hear my song
exposing their alien worship, wrongs

feel right and so they call me crazed. I see
there is no waking from their daze. Lonely
I stride, barefoot powerful warrior,
rise as Gaia-Sophia’s storier.

And (featured images) this morning, Jupiter singing in the moonlight.

*Quote from my newly emerging novel. 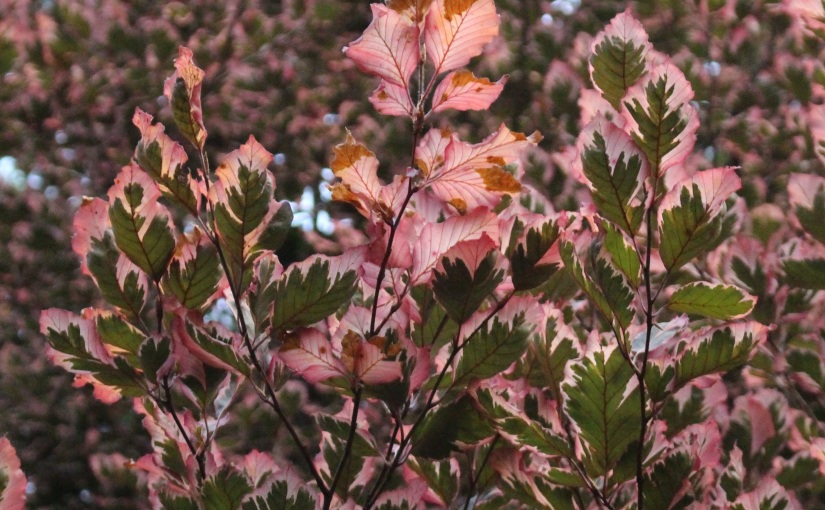 Unless there is internal force for resistance, psychic immunity, so to speak, the individual psyche will adapt to the stress of the collective imagination. It will become what it believes and forget what it knows.~John Lamb Lash

How does one gainsay vacuous culture
built on false premises? Foolish things sure
to topple in the ring of sound inner
knowing, but the words are colored. Sinner

take warning. Perpetrator victim bond
is sealed. Rat race mouse wheel and I respond
to abject pleas and harsh commands: join in.
Homeless, unemployed, I have no coin in

and yet my heart aches as the clones skitter
surface glitter, find the next outfitter.
And how easily they could new create
if they could just release this grasping hate.

Featured image: a tricolored beech outside of my window.

In the rain at dawn, inconsolable
abed, he doesn’t even lift his head.
Adorable and grumpy old man missing
the woman prone to kissing. She had warned

mornings he likes to be alone. We fit
surreal, exact behavior pet sit
repeated and reflected for my heart’s
sweet wisdom teaching. I’m reaching to start

a new way of being. So releasing
old perspectives, new idioms teasing
from the weighted words designed to enslave.
Experience I generate now, brave

and willing to share what keeps revealing
each strong bright presence no more concealing
how we flower in our time through stages
creation we source unique, outrageous.

The hummingbird hovers by moving its wings in a figure 8, reminding us of our divine nature and our joyful essence.

Geese come honking, splashing past this sedate
great blue heron catching minnows. The lake
is swollen and still with cottonwood scum.
My cracked shell breaks. My senses whirl and hum

Inspired by: Sedate, Break and Regard. 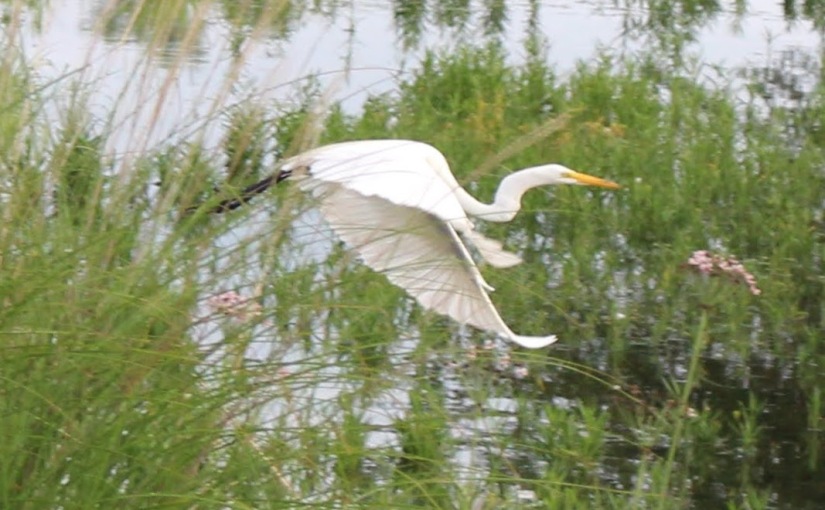 This culture seems designed to vitiate
morals my path forward delineates.
A whirlwind of fear produces anger.
I’m scapegoat at their disposal, gangsters

Featured image a gorgeous huge white egret visited yesterday after I made so much of a tiny white moth. As if my deceased loved ones sending messages said, A moth? Pshaw. Hold my beer…

Giving each caller a trinket. Angels
watching over night and day. My changes
flow in deep currents. I weep for her self
frugality. Clothes on this closet shelf

her only new, so treasured. I bought her
finery she wore with pride, my daughter’s
gift. Imagine each furbelow and flounce,
each pleat an added bounce to her step, neat

and organized beyond her death. I plow
through lists, I make the calls. Expel the vows
of retribution, simply feeling love
that never ends. White swans descend. Above

my head, the poplars are trembling. She said,
it’s not the wind, it’s angels assembling,
look there, outside the window fluttering.
They are here right now, praises uttering.

Inspired by: Trinket, Expel, Self and Flounce. Thanks to my mother’s deathbed visions, poplars will always signify the presence of angels. 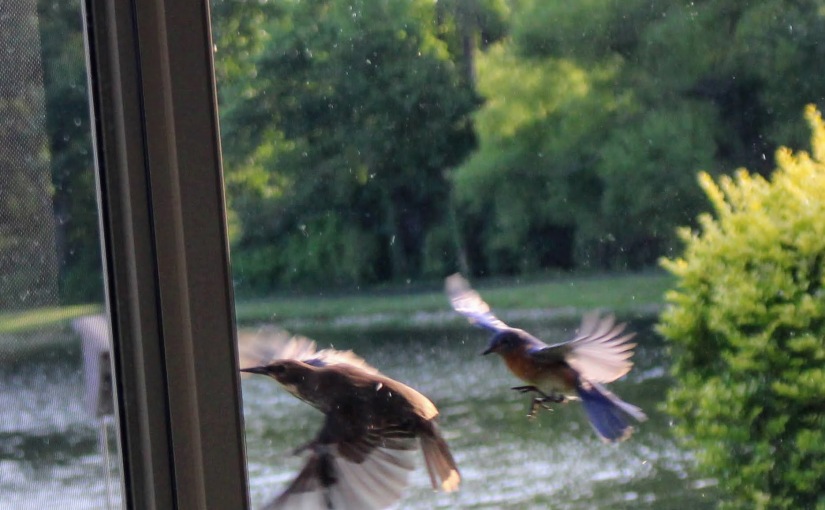 In this starlit darkness, birds create bright
songs to conjure skies. Anticipate light
and soon the eastern glow will lift laments
and cries for those who, stuck in story, pent-

up, inveigled in the lies, cannot know
hope. The freedom codes outring cussed, old
perceptions of enslavement. It’s the fourth
of July. The end is nigh. To the north

the sunrise pinks this long, slow, sweet delight
unveiling mystery and now the night
is over. Dawn presides, a symphony
of trills and whistles colors brilliantly

my sight. I dance and open windows, doors
unlock. My heart instructed by the corps
of angels, spirit messengers in flight.
An owl wings over, last vestige of night.

Inspired by: Lament, Inveigle and Cussed.

Featured image: A bluebird yesterday, driving off a mealworm thief.